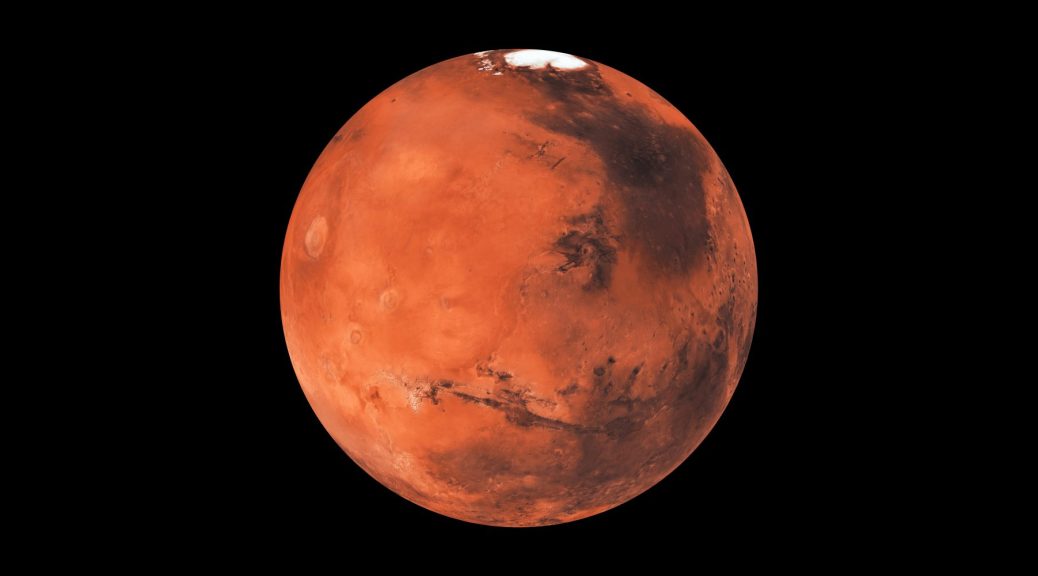 The fourth planet from the Sun and the second-smallest planet in the Solar System is a mysterious, dynamic world once flooded with liquid water, and today frozen into a desert of spectacular dunes, large valleys and extremely tall volcanoes. This, and much more, is Mars, the Red Planet.

Named after the Roman god of war, Mars is usually referred to as the Red Planet due to the large presence of iron oxide (rust) in its surface, which gives the planet that flaming reddish appearance that makes it so distinctive among the astronomical bodies visible in our night sky.

Mars is approximately half the Earth size but its rotational period as well as the tilt of the rotational axis relative to the orbit are comparable to those of our home planet, meaning that a Martian day or “sol” (short for solar day) is only roughly 40 minutes longer than a Earth day. A Martian year on the other hand lasts the equivalent of 687 Earth days.

Other similarities with our planet include the presence of distinct seasons, polar ice caps, vast canyons as well as very high volcanoes. One of these, Olympus Mons, is the largest volcano and highest known mountain in the Solar System: it is 25 km tall, around three times taller than Mount Everest.

In 1877, during a close approach of Mars and Earth, two relatively small and irregularly shaped natural moons were discovered orbiting the Red Planet: Deimos (12.6 km in diameter) and Phobos (22.2 km).

The latter is of particular significance as it is on a collision course with its host planet, getting 1.8 metres closer each century: it is estimated that the two will meet closely in around 50 million years.

Scientific evidence proves that millions of years ago Mars had lakes and rivers of liquid water flooding its surface. The lack of a magnetic field, however, caused the majority of the Martian atmosphere to be destroyed and dispersed into space by the strong solar wind, according to NASA, turning the Red Planet into a frozen world with an average surface temperature of -62°C and peaks as low as -143°C.

Nevertheless, water on Mars can still be found today in the form of ice and in such quantities that, if melted, it would be sufficient to cover the planetary surface to a depth of 11 metres.

This is a fundamental notion as NASA as well as other space organisations plan to establish a permanent human colony on Mars in next decades. We can expect some really exciting times ahead!

Where the universe begins…